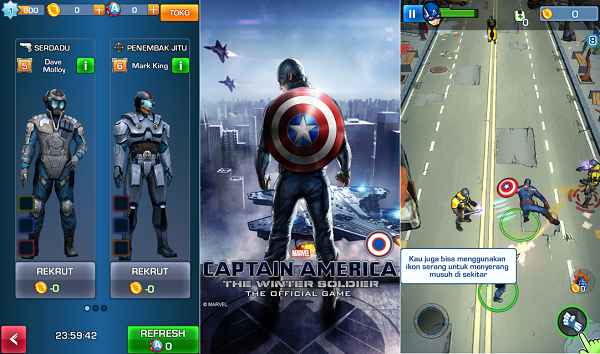 Game with other Marvel Superhero themes. But this time we will discuss is his dedengkot, the Captain America. It is an official game from the moviya with the same title, and has been out since 2014 ago. Although it is an old game, go online. I decided to make a post because gameplay in this game is quite interesting. Anyway this game does not seem to exist in my PlayStore android, either because it was not released in PlayStore Indonesia or because all of my HH is deemed not compatible. But certainly, this game can be smoothly I play.
Viewed from the graphics side, this game displays graphics like a comic book, confused nggambarinnya how. Maybe like a cel-shading graphics, where the background like a 3D graphics but all the color scribe presented in it like a 2D graphics. And the more it looks similar to the comic portrait when occasionally the writing when we beat the opponent, like “FWOOM” for example.
Gameplay in this game can be said quite simple. Player only has to hit the enemy who is present in an area like a hack n slash game, but the Captain is not alone, because in accompanied by special forces from Shield. What is unique is that this game runs on a portrait screen and the player can control the Captain with a touch like a game moba or using virtual analog on the bottom of the screen. One good news is this game uses the language according to the language on our android screen, meaning the player will be more able to enjoy the story, because it supports the Indonesian language.