Download Android Mod Apk Game
Apk Mod
APK Games
World War Heroes MOD APK is out but its still in BETA and UNRELEASED status. Its a World War 2 based multiplayer online FPS PVP Shooter Game for Android. There are no less FPS games available in the play store but we are still looking for something good and big so we can compare it with console games like Battlefield or Call of duty. World War heroes is no exceptional. what you can expect from the WWH MOD APK is amazing visuals, a high end FPS game and some classic Guns and tanks to use. Since its based on world war you will not see any modern weapon here. Its developed by the same Developers who brought us MODERN STRIKE ONLINE and they are GAME DEVELOPMENT LTD. Unlimited Money Cash,credits and Gold is not possible.World War heroes MOD APK Hack is added for unlimited ammo and premium VIP account rewards. 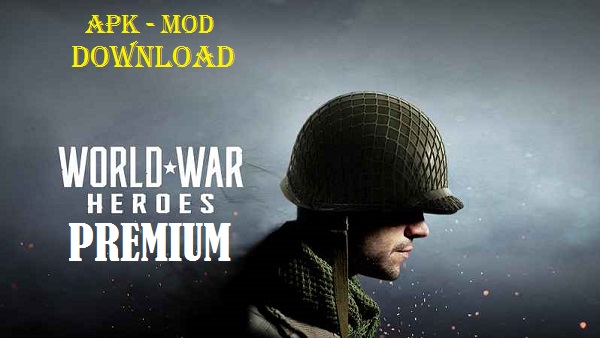 World War heroes MOD APK Android Latest Version Free VIP Premium 1.1
I have always been a fan of FPS games but on android i prefer adventure or rpg titles. still we are getting amazing FPS games on android like modern combat versus which will be out soon and of course Shadowgun legends which will be playing like Destiny.World War heroes is an online multiplayer game which means you will not get any campaign or story mode at all. of course you can not play it offline.
Starting of the game is like modern strike online where you will be taught how to move and how to fire.you will have to point out at 4 flags to advance in the next stage.then you will be in the shooting range.your weapons fires automatically when your cross-hair is on the enemy. switching weapons animation is so good also those old World war weapons nailed it. reload animation looks great. Simply its an impressive game which is based on World War.

World War Heroes APK MOD Different Game Modes:
There are around 6 multiplayer game modes to try out. i am sure TDM will be the busies mode.Lets count those 6 modes Deathmatch where you can kill everyone.its like kill them all mode. we have got Team Deathmatch where you will be in your team and killing other team. third mode is a Bomb mode. its like Counter strike. fourth mode is a team bomb mode where you will have to plant bomb and other team will try to defuse it. a hardcore mode where everyone’s damage will be increased by x3 times. and finally team squad mode where you will be killing other squad members and earn points.
Graphics of world war heroes MOD APK looks damn good. you can clearly see it in the trailer which is in-game footage. Each details and maps are designed to look like a proper WW game. Weapons mechanism and tank combat makes it much more enjoyable. Main menu is almost like modern strike’s menu where you can buy new weapons or upgrade your equipped weapons.this costs silver coin and gold coins.since its an online game World war heroes MOD APK for Unlimited money is not possible.
Since its a freemium game there will be some pay wall where you will need to spend money to advance faster. Thankfully there is premium vip scheme available.Just like modern strike World War Heroes MOD APK has premium account features.but its already activated in the MOD APK of World War heroes. using premium account of War heroes you will get 25% extra XP and Credits. you will also get infinite ammo using the MOD APK.Do not expect GOD MODE or any other wall hack or kinda cheats because i wont add any.it will ruin Multiplayer Fun for some players.